I’ve just lost1 a full post. yeap, just finished writing it in gvim, hadn’t saved it nor copied it to wordpress online editor and saw miself forced to reboot my computer because.. I ran out of RAM. I couldn’t switch programs, nor input anything. It was frozen. And it had plenty of space to use for swap (Mac OS X uses a swap file by default) but somehow it couldn’t handle it.

So what was it about?

Some weirdness I was confronted after ripping the new Daft Punk CD (I couldn’t resist, I bought it the same 21st of May it was launched).

The problem came from some alac rips (it did not happened with flac).

The files showed some strange creation dates when opened with MPlayer. Some ordered dates starting in the 20′s and ending in the 80′s. 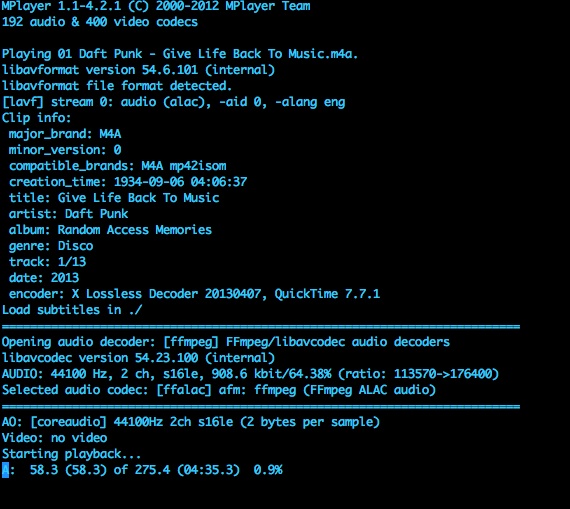 At first I though it was some easter egg but after ripping the files a second time I realised those new files showed some similar dates, but not the same. That’s why I blamed XLD (the program I used to transcode from aiff to alac) but that was another mistake. XLD did a great job in finding metadata in a few seconds and ripping the whole album in under 5 min. I ended up blaming MPlayer, because no other player showed that metadata. THey all showed only ’2013′ as the date (which was also showed in a different line by MPlayer, as shown in the screenshot). Even the OS showed a real creation date which is, as expected, the day the files were created by XLD.

What do you think makes MPlayer show those dates consistently every time I play the songs?